This is what happens on the occasion of Lugano City of Taste, which has decided to collaborate in close contact with the Comic Strip Fair, one of the cultural strongpoints of the territory. Now at its eighth edition, the event dedicated to the world of the comic strip will present a limited edition of the 2018 album, this year drawn by the great Guido Silvestri, better known as Silver.

The brilliant creator of Lupo Alberto, the character that we all recognise as the loveable wolf with light-blue fur, decided to pay homage to our city, national oeno-gastronomic capital between 13 and 23 September this year, setting the story right here in Lugano. Lupo Alberto, this time in the guise of a detective in search of the thieves who have stolen the holes from Emmenthal cheese, thus becomes one of the key figures of the gourmet event of Lugano, also linked to another event of equal excellence, which every year brings thousands of fans of manga – and not only – to the city.

“It’s a real honour,” says Dany Stauffacher (president of the organising committee of Lugano City of Taste), “I’m a comics fan myself, and I have always admired the great work of those who every year manage to bring great names to Lugano such as that of Silver. Lugano City of Taste and the Comic Strip Fair have a lot in common, such as the quest for excellence, each in their own sector, so as to provide the inhabitants of Lugano with the very best: both at the table and on the drawing board.”

Fabio Baudino, the driving force behind the Comic Strip Fair together with his son Luca, explains that “it all started a few months ago in an office in Lugano. I could not let the chance slip by to link our Fair to an event of such importance as that of the City of Taste. From there, it was all a natural consequence; for example, the choice of Silver as the designer of our little gem: the album which every year is given away to all the Fair visitors. Silver is perhaps the cartoonist best suited to telling a tale featuring a cheese…without holes!”

In his own way, and with all the irony that also characterises his four-legged friend, Silver tells us the story of the comic book: “Someone has stolen the most precious symbol, the sacred fetish, the very soul of the country: the holes in the Emmenthal! The legendary dairy product, pride and joy of the nation, is now nothing but a common-or-garden gruyere. The gendarmerie are on guard, the stock markets are trembling, the squares are bustling, riots are feared, along with the toppling of all democratic institutions…
All the hopes in a rapid solution to the case and a return to normality are placed in the great cunning and in the investigative skills of two long-standing cartoon characters, Lupo Alberto and his worthy companion Enrico la Talpa.” 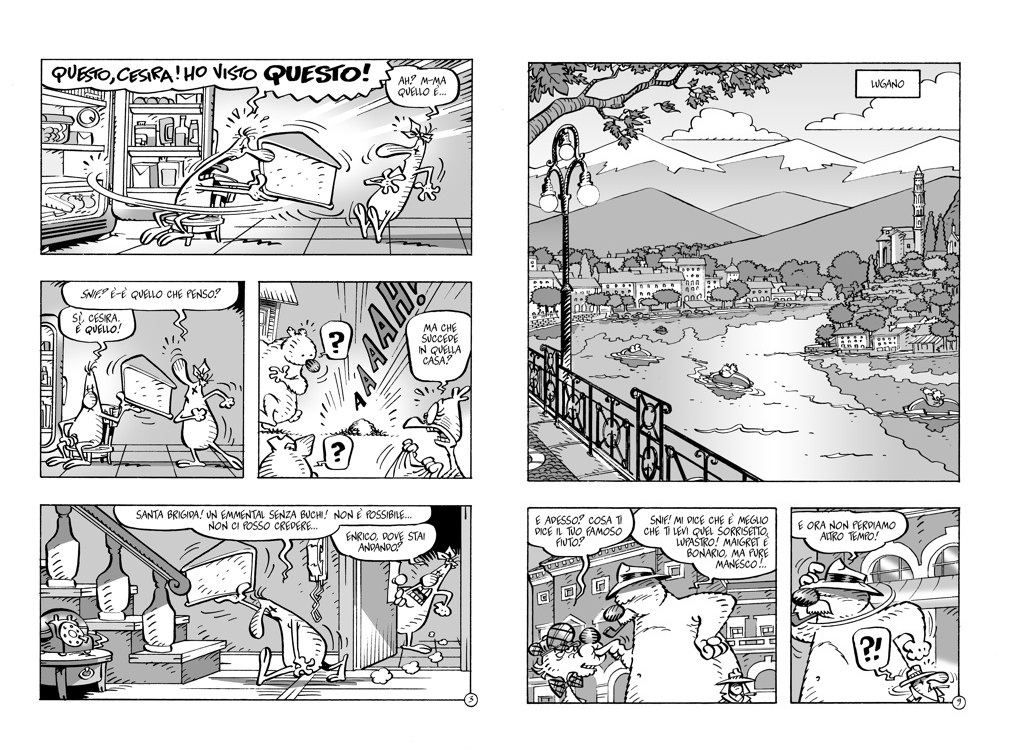